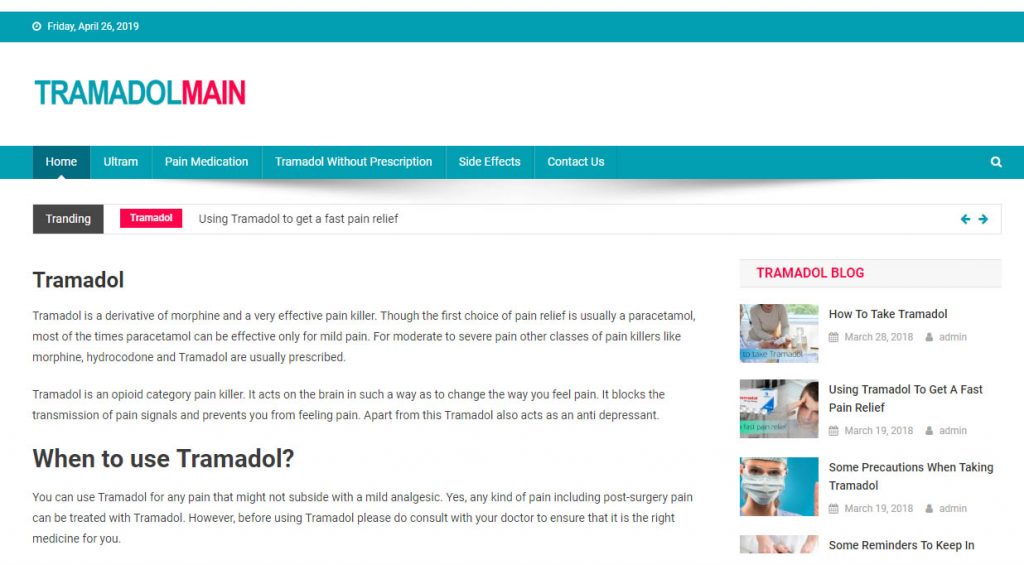 TramadolMain.com is a site which provides information about the drug Tramadol. This site promotes the use of the drug without a doctor’s prescription. We investigate this site to discover that it is part of a business which sells pills from unknown sources.

This domain name was only registered last year and the owner used a registrar based in Hong Kong, China. It stands to reason, that websites which have been around for less time are less trustworthy than sites with a long track record. So this site, having only been online for a little over a year, may not be that reliable. 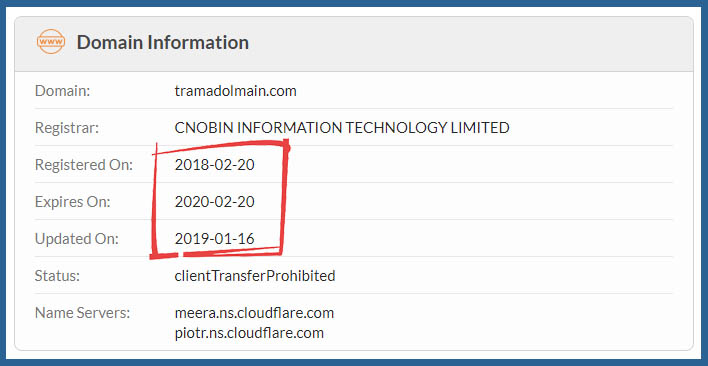 This site is promoting the sale of Tramadol with no prescription. Tramadol is an opioid which is mainly used to help patients deal with mild to severe pain which is either chronic or acute.

The drug is Schedule IV in the US, Class C in the UK and Schedule 4 in Australia. What this means in all those countries and many more besides is that they consider that the drug needs to be prescribed rather than sold over the counter.

The risks of becoming addicted to this drug are very real. If someone has been taking this medication for pain, correctly prescribed by a doctor, there is a risk of addiction because the symptoms of withdrawal are unpleasant enough that it is easier to carry on taking the drug. Long term users of the drug build up a tolerance and require larger dosages to avoid withdrawal symptoms.

Why Does this Site Exist?

They don’t sell anything, at least not directly anyway, so why would someone create such a site? One of the answers to this is to direct customers to other sites owned by the same person or organization.

Far too many online pharmacies are a scam and as such run the risk of being shut down by law enforcement. With the aid of ICANN, these stores can have their domain name taken away from them. A site like TramadolMain.com allows the owner of scam pharmacies to set up new stores when others are shut down and carry on where they left off.

Another reason for this site is to get more visitors to the owner’s pharmacies. This is achieved by creating a site which contains a lot of information and thus is likely to rank higher in the search engines than a pharmacy store.

Having a site like this link to pharmacy sites will likely give a boost to these stores in the search engines as well. Higher rankings mean more visitors and more visitors means more money for the owner of such online drugstores.

This site links to two pharmacy stores which offer Tramadol for sale.

When you visit these sites you realize that, rather strangely, they are identical to each other. The only difference is the name, everything else is the same.

When we check we can also see that both of the domain names used for these stores were registered on the same day (less than two years ago) and use the same registrar. They don’t provide any details of ownership in the domain name records, but it is certain that they are owned by the same person or organization and this site probably has the same ownership too.

These sites give no information about where the drugs are dispensed from or where the business is based which operates the stores. They also lack any indication that they are regulated by any authorities and this is not what you would expect from a legit pharmacy.

This lack of transparency massively increases the risk of dangerous fake and counterfeit drugs being sold by these pharmacies. There is a big worldwide problem with low-quality medication that puts people’s health in danger, even killing people and these stores seem to be somewhere that could be selling such drugs.

There is no sign of any TramadolMain.com reviews which isn’t too surprising given that they don’t sell any products themselves.

When checking for customer comments on the stores that this one links to we have only been able to find one and it isn’t positive.

This feedback was for OnlinePharmacyTab24.com and the customer found the pharmacy to be a complete fraud operation.

This site appears to be part of a larger scam to sell drugs which should be prescribed, to people who the drug may not be suitable for. The stores which this site links to, lack any regulation and fail to provide any information which would suggest they are operating safely. Consequently, we give this site only 1 star out of five.