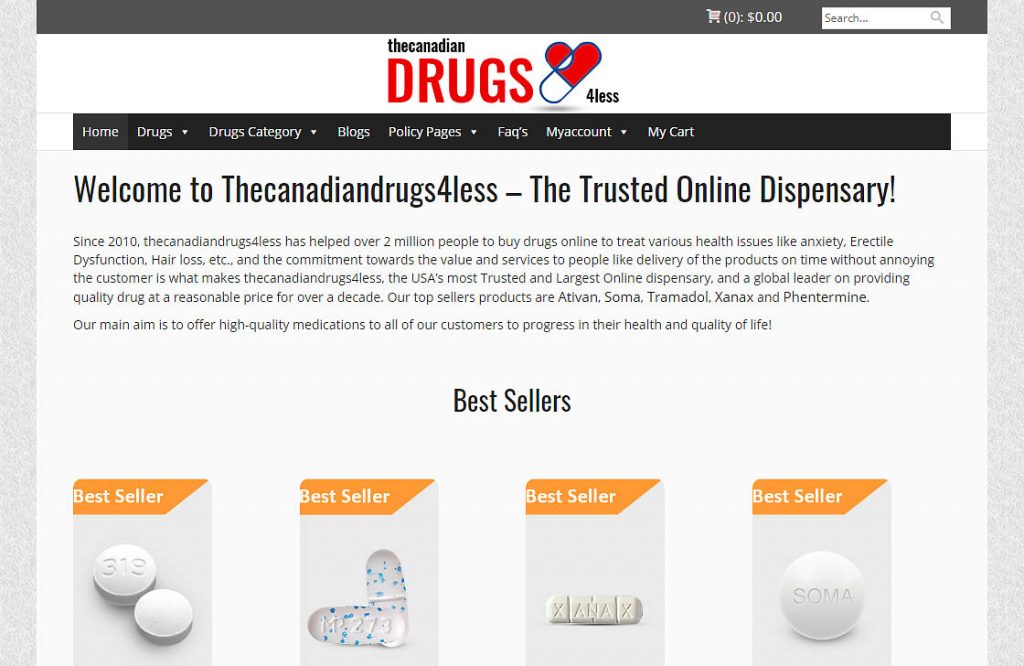 TheCanadianDrugs4Less.com is a pharmacy which claims to the USA’s number 1 online medical supplier. They say that their pills are affordable and that they have been in business since 2010. However, our look at their site reveals some very damning information and they seem unable to stop lying.

This domain name has been registered since 2015 as shown in the domain name records. This is longer than some scam pharmacies that we see so doesn’t necessarily draw suspicion. 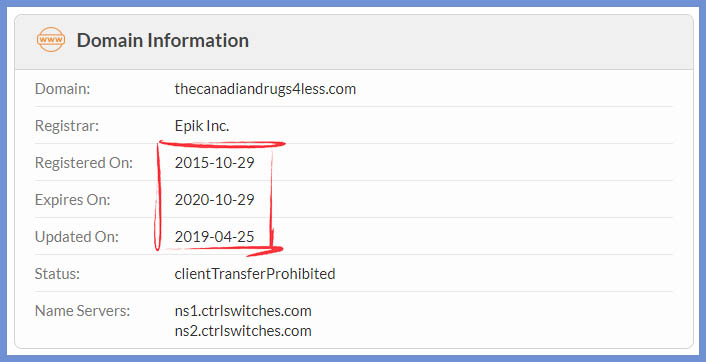 We are less happy to find that the owners of this pharmacy have chosen to use a domain privacy service. This makes sure that their information doesn’t feature in the open domain database and is something that scam pharmacies frequently resort to.

This pharmacy makes a big play of being a US-based pharmacy but despite this claim, they don’t provide an address to confirm that this is really the case. Without an address or business name, we are left in the dark over who owns the store or where it is run from.

The website address is called “The Canadian Drugs 4 Less” which is strange given they claim to be based in the US.

They also say that they are the USA’s most trusted and largest online pharmacy. This is complete nonsense and obviously untrue. They state that they have helped over 2 million people buy drugs online, this is also highly unlikely to be a true statement. This is contradicted on another page of the site when they say “Thousands of peoples from around the world have made a purchase from us”.

Even though they say that they are a US pharmacy, the writing on the store doesn’t seem to confirm this. Sentences are frequently grammatically incorrect and give the appearance of being written by someone for whom English isn’t the first language.

They also say that they have been in business since 2010 when we know that their website address was registered in 2015. Perhaps, they were just using a different domain name back then or more likely, it is just another lie.

We don’t really believe that this pharmacy is operated from the US, it is most likely a lie to try to convince more people to make a purchase with them.

If this pharmacy was really based in the US, we would expect to find that they are regulated by the NABP (the National Association of Boards of Pharmacy) and their VIPPS program. They don’t have any seals from this organization and don’t appear to be registered with them. 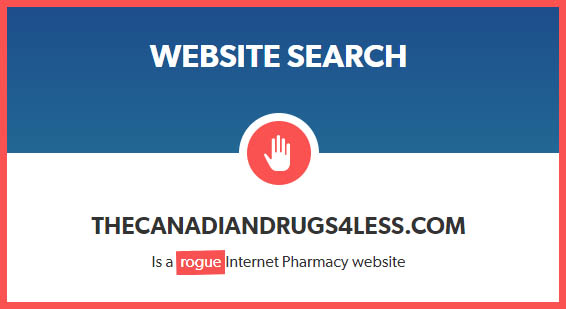 This problem is confirmed by LegitScript. They indicate that the store is in violation of the applicable laws for where they sell meds. Their classification of a rogue pharmacy is the lowest available and shows that there are many problems with this drugstore.

The best selling pills on the store seem to be drugs like:

These are drugs which should only be prescribed, but the store doesn’t require prescriptions from customers.

They also offer a few other types of drugs including men’s health pills. They say the drugs are being dispatched from many different places, including India, Singapore, Europe and the USA. Strangely, though, they don’t seem to be dispatched from Canada, so not the Canadian drugs the store would have you believe.

The store is secure and they will take you money using:

Shipping will cost $30 and there is also an insurance charge of $20 which you can’t opt-out of. This makes a purchase from this store very expensive before you even think about the cost of the drugs.

There isn’t a page for thecanadiandrugs4Less.com reviews on the site. We are unable to find any customer testimonials on other review sites either. This is a surprise given that the store claims to have supplied pills to over 2 million people and shows this up to be the lie that it is.

It is very clear that this pharmacy is willing to say anything to try to convince customers to order. Our look at the store has uncovered lie after lie. They also don’t have any regulation and are operating anonymously from an unknown country.

We recommend you look elsewhere for your medical needs, we give them just 1 star.