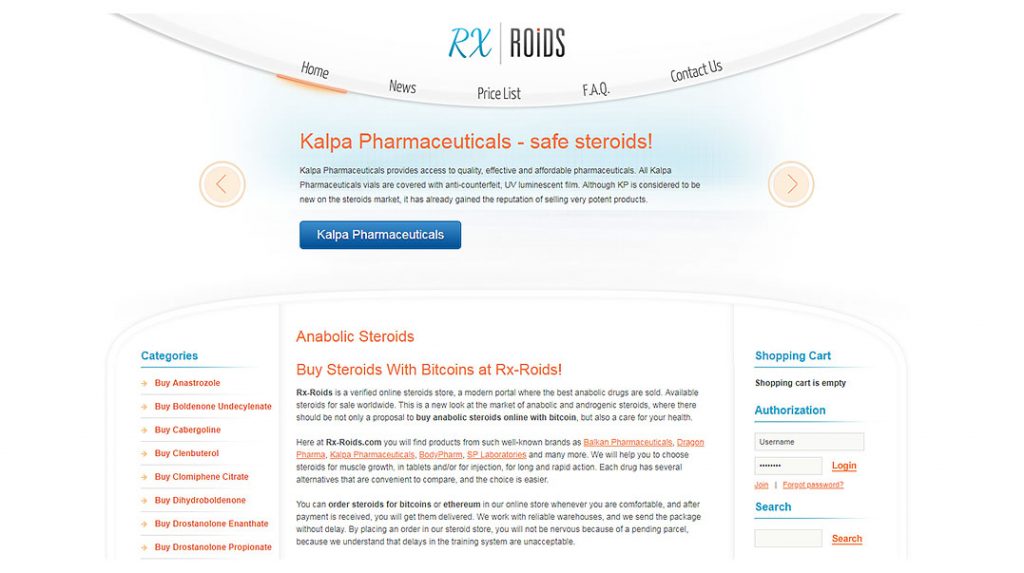 Rx-Roids specialize in selling steroids as the name would suggest. Their name would also indicate the use of prescriptions, they don’t however, require a prescription for any of the drugs they sell.

They don’t just stick to selling steroids, you can also buy other treatments such as acne medication and male libido pills. The prices here don’t seem particularly good and there seems to be some confusion over what a generic pill is. They say the pills are a brand name product, but then also claim it is generic.

There isn’t any information on the site telling you about who runs this business or where they are based. Their contact page is simply a form which goes who knows where? They have an email address for when shipments are seized and this is just a free Gmail account. Not exactly the most professional way of doing things.

They claim that they are authorized suppliers for multiple drugs companies. We were able to check several of these claims, as they suggest you do on their site.

The website name was registered in 2016 to a company called Bio Pharm, based in Jamaica. Whether this is a real company and really where they are based isn’t supported by any evidence. There is no reference to Bio Pharm being a genuine registered company, anywhere to be found. 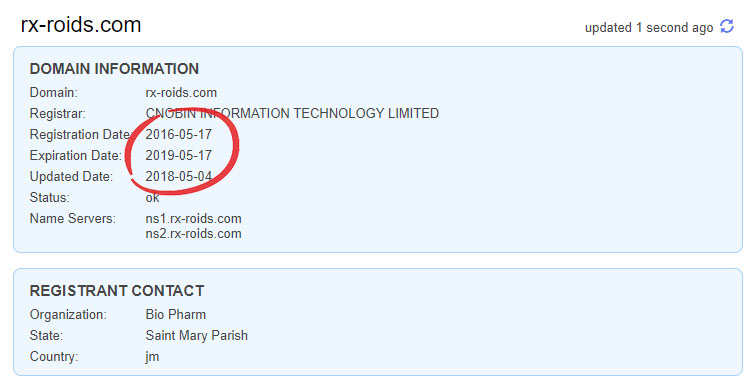 There are 19 other sites found on the same server. Many of these other sites are also online steroid retailers. Whoever is behind Rx-Roids.com has set up many other very similar sites. This is the sort of thing you can expect from someone who is trying to scam people, setting up multiple sites to con as many people as possible. Then once they are discovered, it doesn’t matter as they still have more sites up and running.

Purchases of steroids can be made using Bitcoin or Ethereum. They don’t accept Paypal or credit card payments. A 10% discount is offered when making a purchase with Bitcoin. The disadvantage of using Bitcoin for the consumer is the lack of ability to charge-back if the seller doesn’t deliver. You should really only use Bitcoin when you know you can trust the person you are sending coins to.

The terms of service on the site seem to have out-of-date information with regards to payment. It says that Rx-Roids accept Western Union and Money Gram, with no mention of Bitcoin.

Worldwide shipping is offered and products are dispatched in discreet packaging. Part of the reason for this seems to be because they have experienced many shipments being seized by customs. They do not reship more than once if this happens and don’t reship at all to some countries. They don’t say that they will give you a refund if this happens, so presumably, they don’t.

Shipping costs are “around $28”, apparently they can’t be more accurate than that. Shipping times can be up to 25 business days for remote locations, but normally 15 business days or less.

Customer feedback is useful for you to have trust in the online retailer. Often scam online drugstores will resort to posting fake testimonials to trick the unwary into believing they are a reputable business.

There isn’t a page for Rx-Roids.com reviews on the site itself, but it does link to another customer review site. The Roids Reviews site has one customer testimony, and it isn’t good. The customer calls them out as a scam site which doesn’t deliver on their promises. It doesn’t get much worse than that from a customer review.

The people behind this site have gone to some lengths to hide who they are. Whilst they don’t hide details in the domain name records, it seems like they are using a false company name and address instead. They don’t seem to be official suppliers, for at least some of the drugs they sell, and as such we can only give 1-star out of five. This is not a trustworthy supplier of steroids and should be avoided.