Canadian-One.Approved-Medication.com is a pharmacy that claims to have the best prices online. They also say they have over a million happy customers, but this is a lie we’ve seen many times before. So is this pharmacy worth your time? Don’t make a purchase on this drugstore without reading our review first.

Unusually this pharmacy is using a subdomain for their website address. The first part of the address before the period is the subdomain and the second part, Approved-Medication.com, is the actual domain. Though if you go directly to that domain the website does not load. 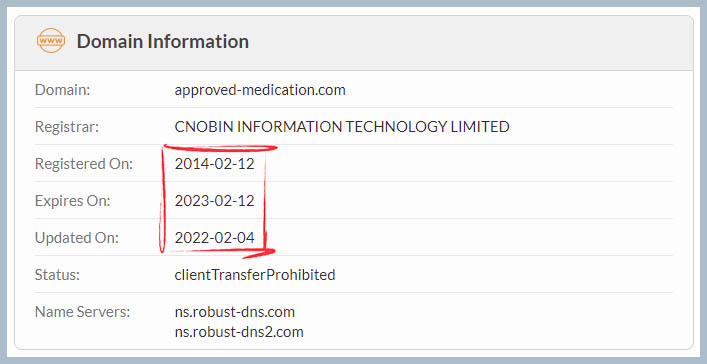 The domain they are using has been registered since 2014, which could indicate a more reliable drugstore as they’ve been around longer. Though their use of a subdomain looks suspicious.

We only know a small amount of information about who owns this pharmacy, and it tells us they are located in China. This is strange as they have Canadian in their pharmacy name.

The business name Canadian Pharmacy Limited has been used though we have seen this many times before on other scam pharmacy sites. This isn’t a genuine business name, but that isn’t surprising given the contradiction between this being a Canadian business that is located in China.

The pharmacy doesn’t give us a contact address, but bearing in mind what we have already discovered, this isn’t really a surprise.

The pharmacy appears to have some regulatory seals at the very bottom of their website. While these might appear to show that the store’s operating to a higher standard, they are actually fake.

Their pretend seals do sound somewhat like the real thing, but they are entirely fake. There are Canadian regulatory associations called CIPA and MIPA, but the real seals don’t look anything like this.

When we check with LegitScript, we can see that they have been classified as a rogue.

There is a fairly good range of pills, though far less than you would normally expect from a regular drugstore. You can choose between the following categories and more:

The store claims to sell both brand and generic drugs though we can’t be entirely certain that the brand pills are genuine. And even with the generic drugs, the pharmacy doesn’t tell us who has manufactured them. Both of these problems increase the risk with this pharmacy.

If the meds sold by this pharmacy are counterfeit and low-quality, there will be significant problems for anyone who relies on the pills they get from this pharmacy.

While you expect your medication to fix your health problem and make you better, low-quality pills might not work. They could have completely the opposite effect, in fact, making your cheap pills not seem like such a bargain.

When you place an order the store takes you to a different website. This other place is secure with a basic SSL certificate, and they also have seals from security companies though they don’t appear to be genuine. You can pay using major credit cards only.

If you want to get your meds as quickly as possible, it will cost you $29.95, and delivery will take between 5 and 9 business days. This more expensive option does include tracking, unlike their standard airmail service. Airmail costs $12.95, taking two or three weeks to be with you.

There is a testimonials page that includes some customer feedback. These Canadian-One.Approved-Medication.com reviews are not genuine as they turn up on many other scam pharmacy stores as well. 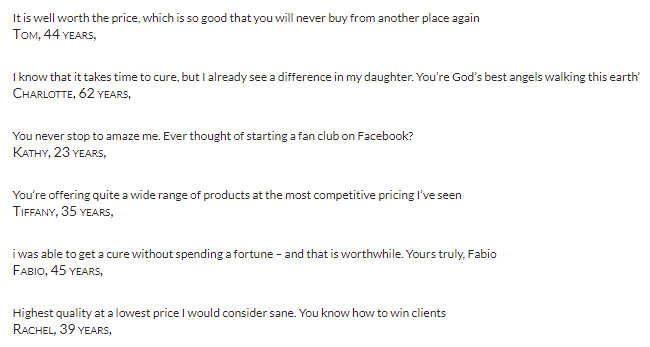 As we have shown, this isn’t a good pharmacy with considerable issues, and we give them 1 star. We don’t know where the pills are dispensed from, we don’t know if they are high-quality, and the store is using fake customer comments to make it seem like they are reliable.

All of these problems could be very bad news for a customer that has to rely on pills from this pharmacy. With so many other options, you can quite easily avoid this pharmacy.